A tabby stray walked into an apartment to have kittens and found help for them just in time. 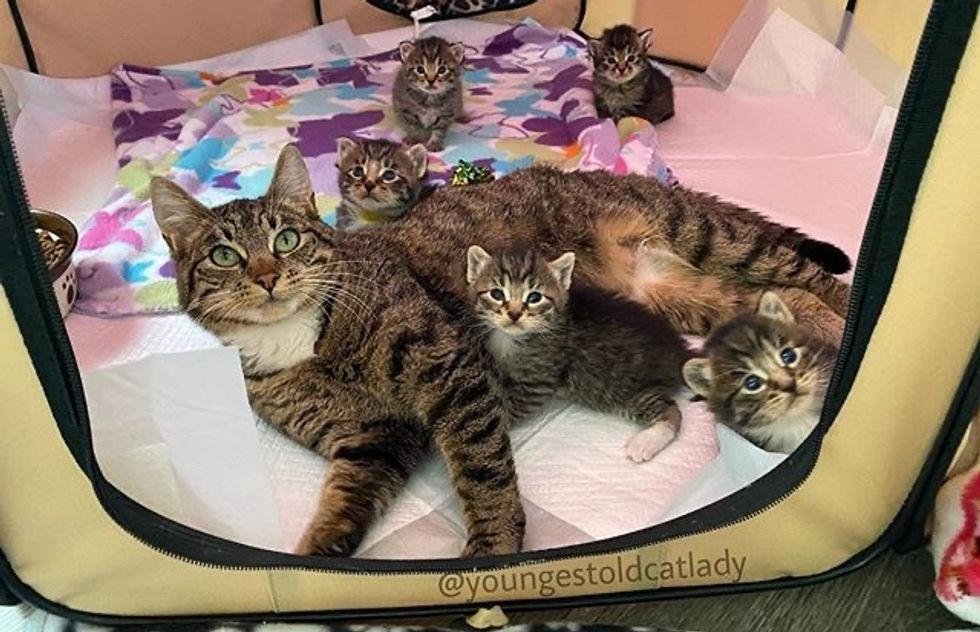 About a month ago, Ashley Morrison, a rescuer based in Seattle, Washington was contacted about a stray cat who just had her kittens at a resident’s home.

The community cat had been living outside at an apartment complex and was always a bit timid around people. “She had started to become friendly with one of the renters and would venture into their apartment from time to time,” Ashley told Love Meow.

The cat would usually go back out at night, but one evening, she insisted on staying. “An hour later, she gave birth under their table.” 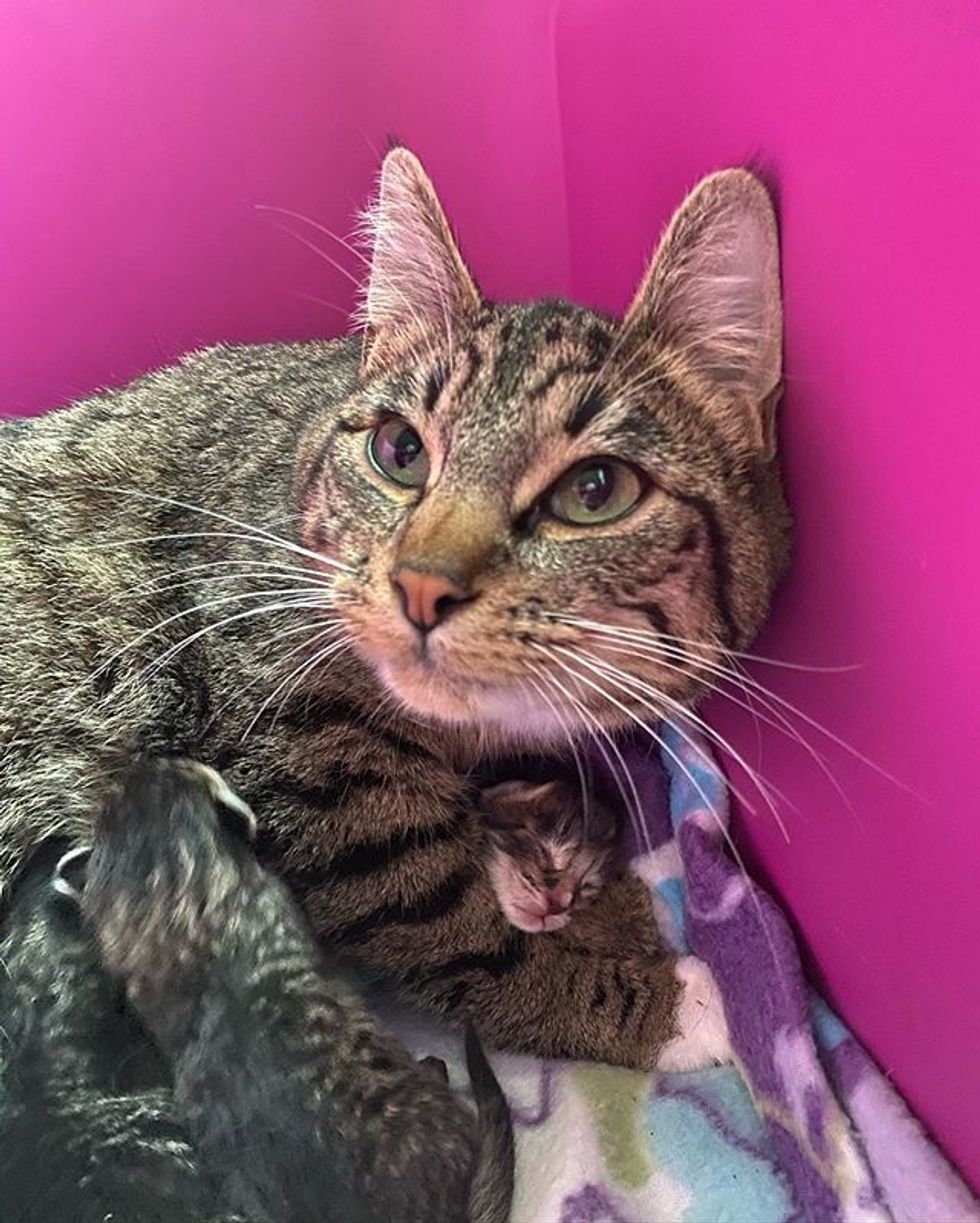 The renter reached out for help, and Ashley immediately responded. She brought the family of six into a quiet room, but the mom was frightened and attempted to escape.

“She wasn’t used to random people and human interaction. She was climbing the walls and was so scared of me,” Ashley shared with Love Meow.

After 24 hours going from outdoor stray life to indoor foster care, the tabby (named Moira) calmed down a little and started to enjoy her first meal and some head scratches. 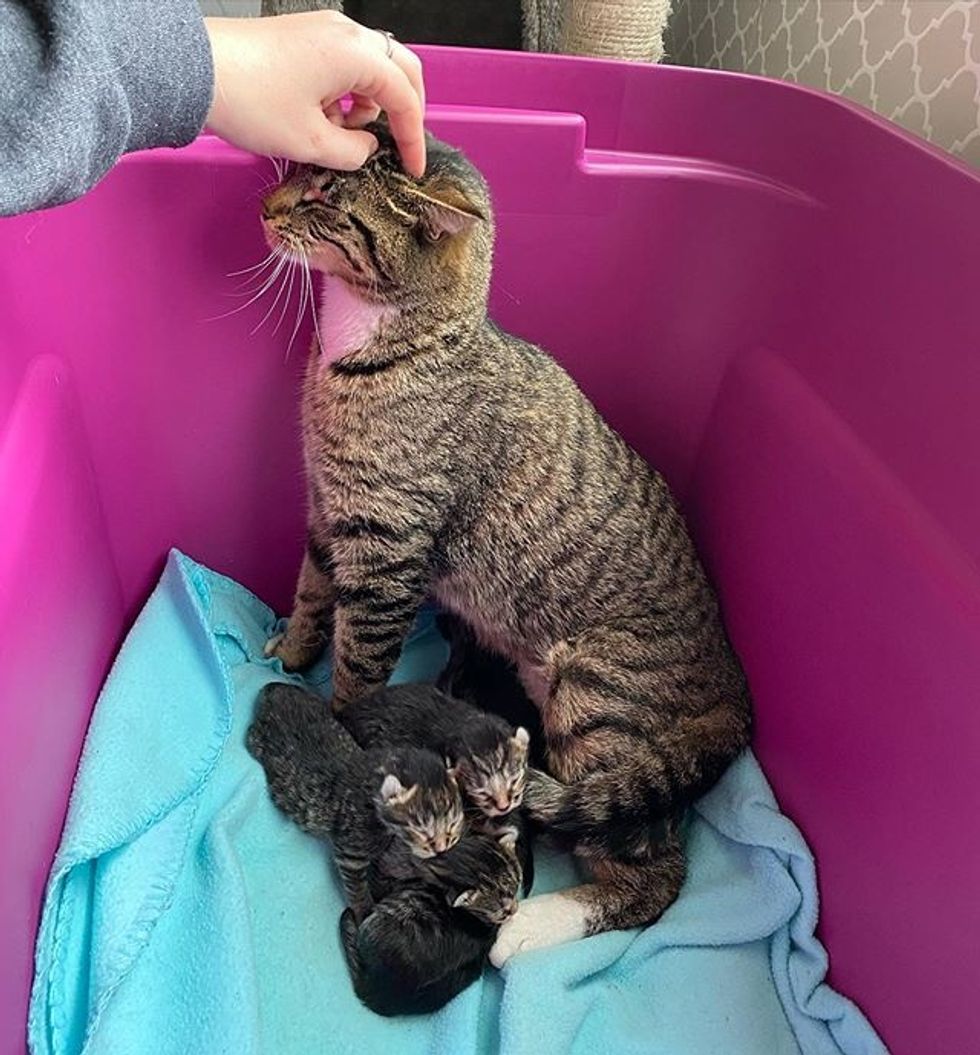 “It took days for me to get her to be comfortable with me sitting in the room.”

Once Moira experienced belly rubs, she wanted more. She would do a twirl and flop on her side, asking for more. “She’s officially a big fan of all the pets. While I’m petting her she will close her eyes, and if I stop she nudges my hand with her chin.” 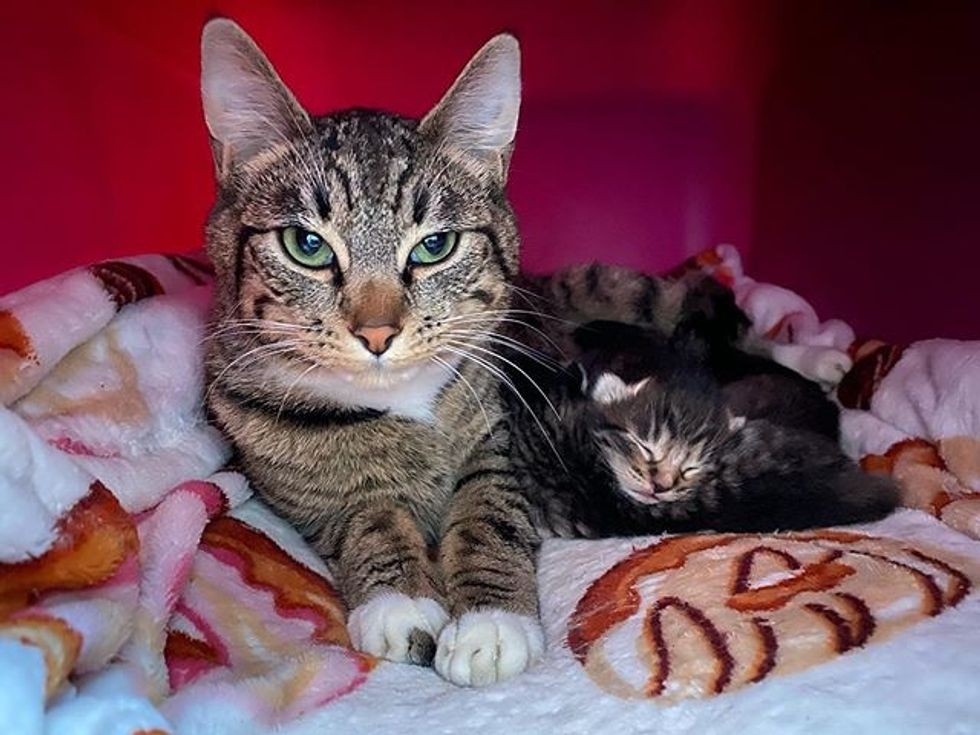 Mama Moira was very happy with the custom-made nest Ashley provided for her little family. It was a large tub with a moderate-sized hole for the cat to go in and out. Blankets were placed on top to create a safe shelter for the family.

“I’ve found it best to give cats that are not used to living inside, a dark small area where they feel they are protected from predators,” Ashley said. “If I did not provide a space like this, they would try to move the kittens out from any open space into hiding spots.” 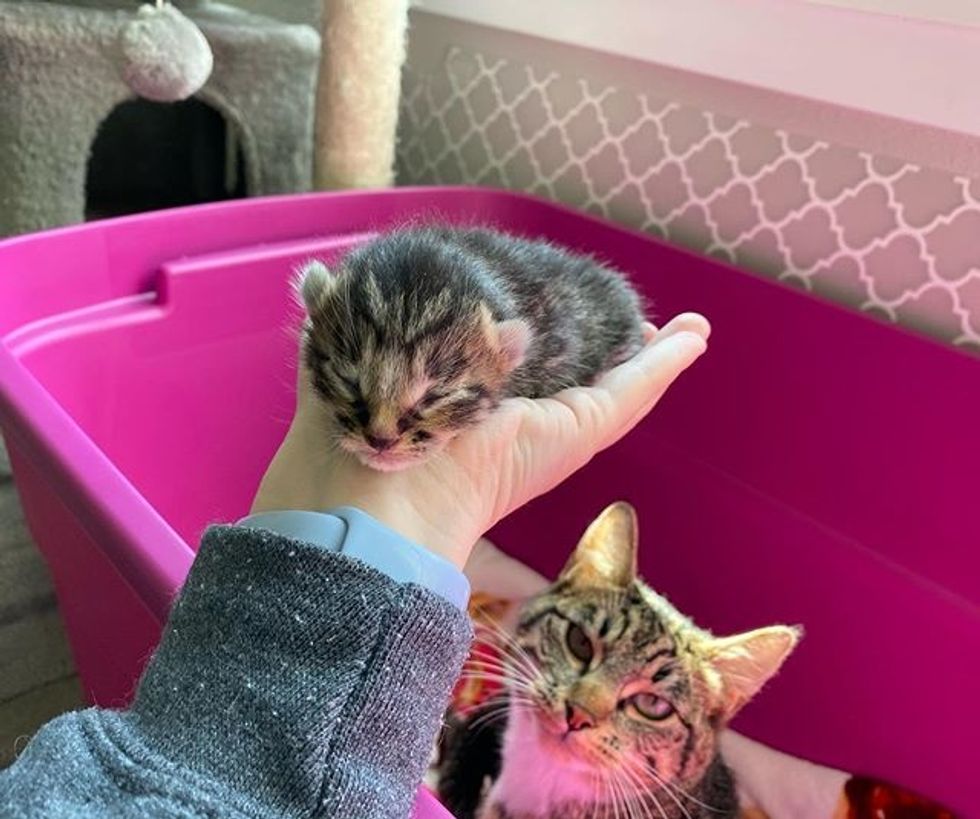 Over the next few weeks, the shy tabby blossomed into a “kneady” purr machine. Every time, Ashley laid down a fresh blanket, she immediately went at it with her paws, kneading away for hours.

Watch Moira and her kittens in this cute video:

Moira the Cat and her kittens – foster journey

For the first time in weeks, Moira wanted to be out of the tub and seek affection from Ashley. She snuggled up to her human and even purred.

“She’s always wanted to be in the tub for ‘protection’ but she’s learning I’m at least a mediocre human,” Ashley said. 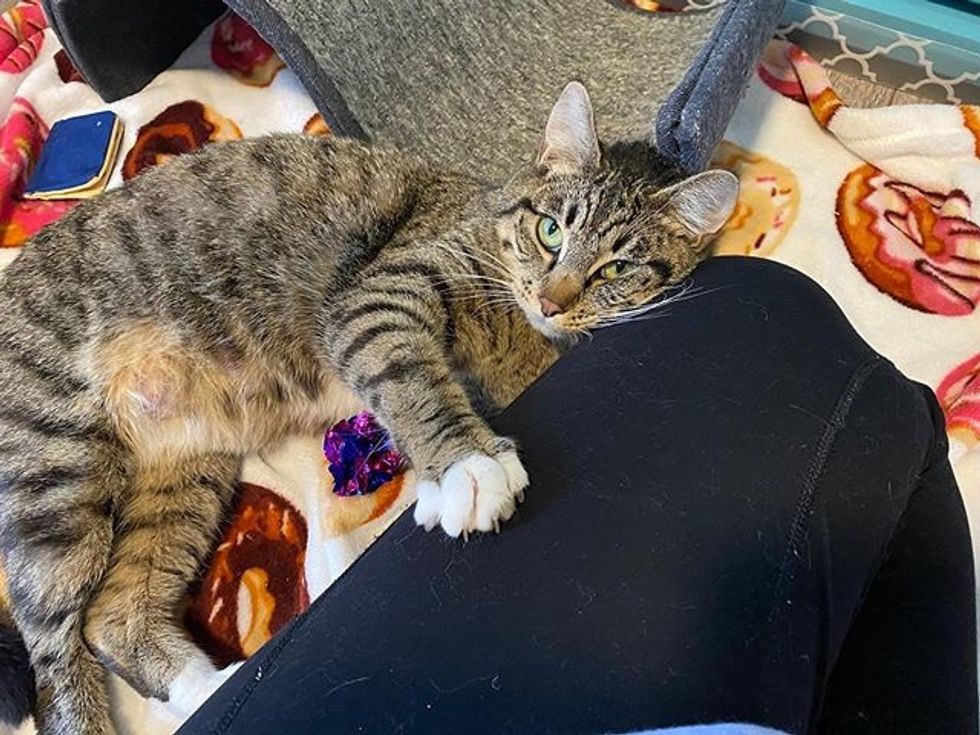 When the kittens started to crawl, Ashley upgraded their living area to a spacious kitten suite where they could waddle around under Moira’s supervision.

“They are learning to play, wanting to explore further from mom and getting more confident in wobble running.” 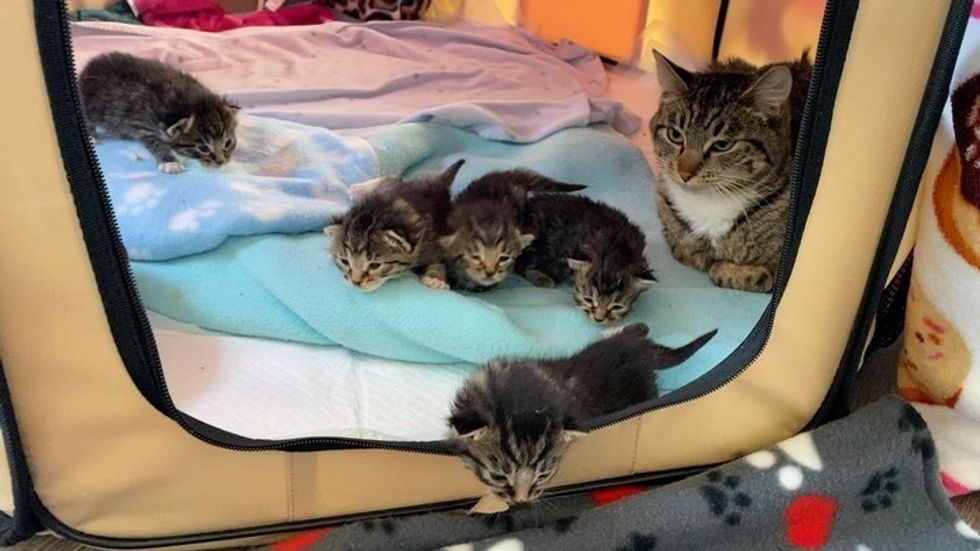 “I don’t think Moira ever stops making biscuits — imagine how happy she is,” Ashley added.

“A few weeks ago she was heavily pregnant and living outside, sleeping under an apartment complex and living off food left outside for the cats. She really stuck up for herself when she walked into some friendly people’s apartment and refused to leave while she had her babies.” 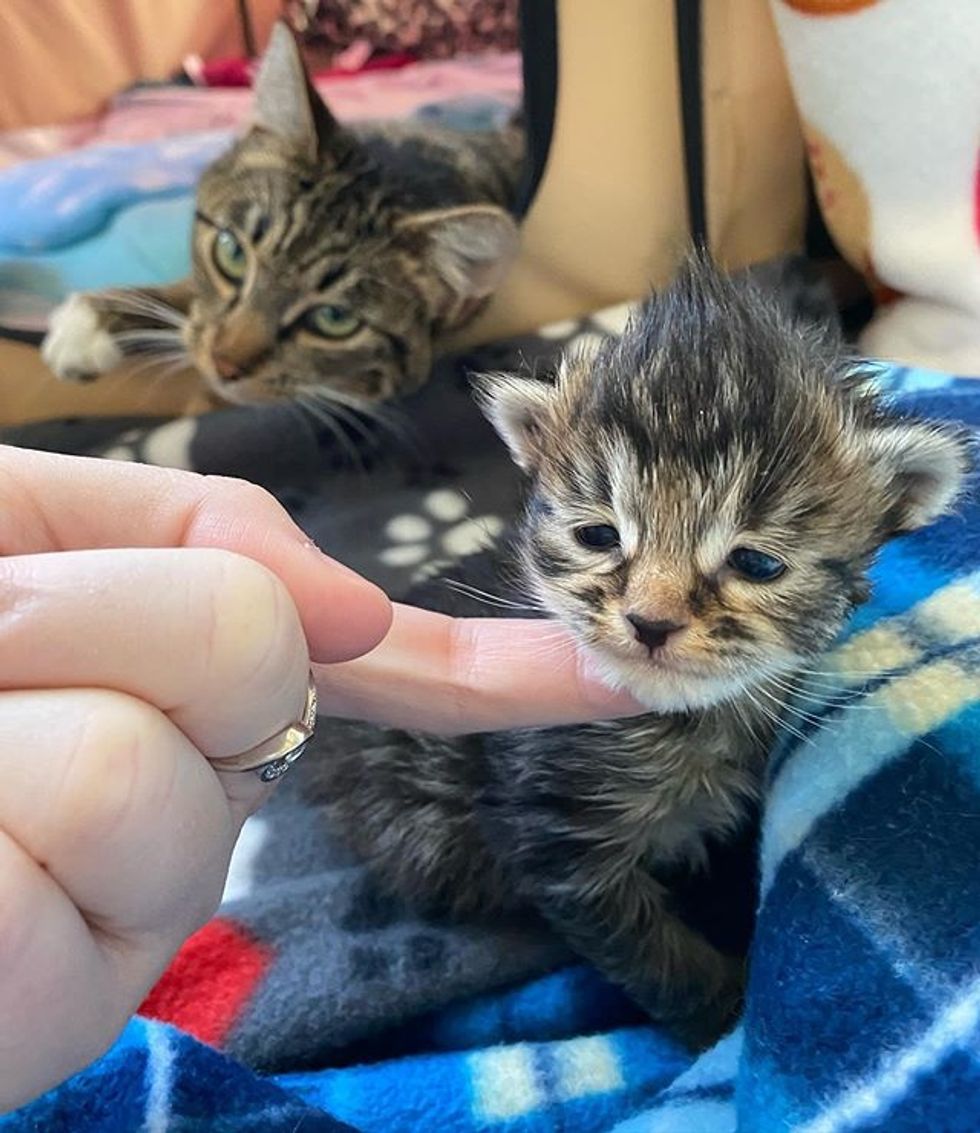 Now, they all have full bellies and are warm, loved and thriving. Moira will never have to have another litter or live outside again.

The shy tabby has transformed into a giant love-bug, stretching her paws every day in pure bliss. 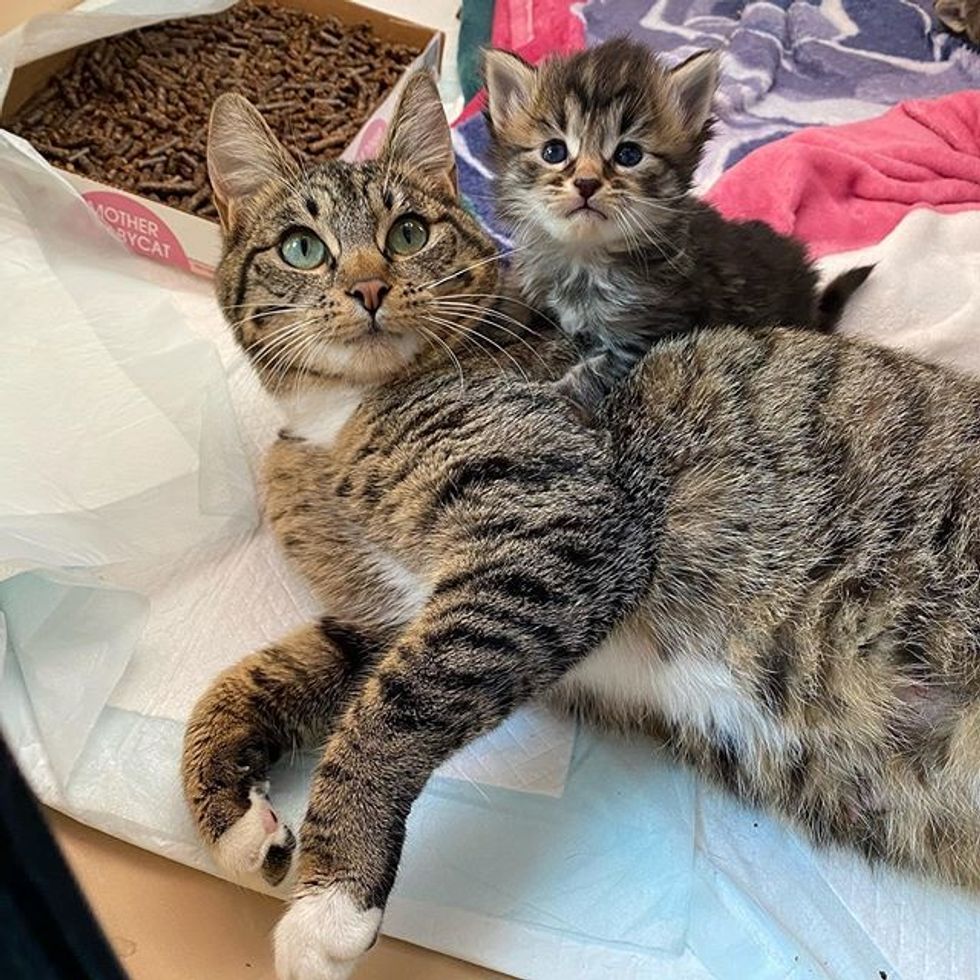 “She will still run and hide when she hears a loud noise (like a lawn mower) but as soon as I talk to her she calms down and comes back out,” Ashley told Love Meow.

“I can’t wait to continue to see her make progress, and I know we will find her a nice quiet home where she can be a kitten again herself.” 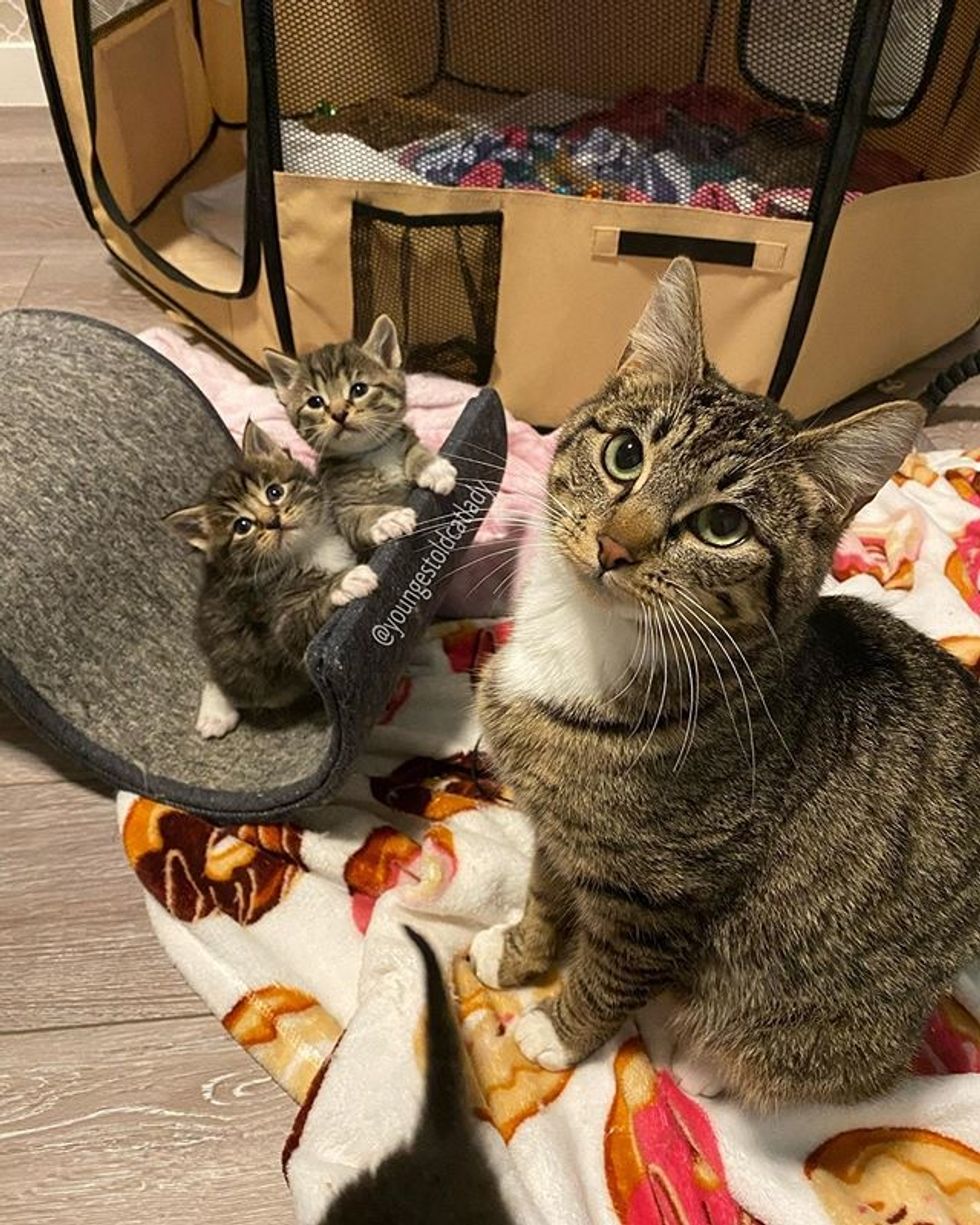 Related story: Cat Walked into Woman’s Apartment with a Kitten, Then Came Back with More